The beginning of December in Blue City belongs to big and small fans of science fiction cinema. During the “Robots” exhibition in the corridors of the centre there will be figures of the greatest fantastic heroes from the films Transformers, Terminator, Matrix, as well as characters from Star Wars and many others. The work on each of the figures is the result of many weeks of extremely creative work by a team of engineers who designed and assembled the machines.

These are the film characters that we will meet in Blue City:

The second largest among the presented models, it is distinguished by the elements of the passenger car body used for the body shell. A lot of old shock absorbers and gears used in trucks were used to build this figure. The arms, for the production of which empty gas cylinders were used, stand out in the construction.

The total weight of the figure varies between 260 and 290 kg. When looking at the figure, one immediately notices the exhaust of a passenger car, which was used to build the back of the figure. The arms are made from pistons used in diesel engines.

A large green-grey robot with a massive body and powerful physique. The whole figure weighs about 240 kg and was made with new technology. Its completion required the work of four engineers and took almost two months. For the construction of the legs shock absorbers used in large construction machines were used, among other things. The distinctive chin and body parts are build of, among other things, visible bicycle chains.

The most work on this figure was done by a metalworker who created the exact face of the machine from sheet metal elements. Old fuses that serve as bullets were used to make a rifle.

The characteristic element is the tentacles. The top layer is nothing but elements of large industrial hoovers, which resemble robot arms. The head was created from parts of an excavator engine.

The biggest challenge was the figure’s head. Creating the perfect shape required the most work. Large sheets of recycled metal were used to build it.

A simple and quite light figure. The creator tried his best to reflect the nature of the film character.

R2D2 – the smallest in the collection. Part of the body is nothing else but elements of Frania washing machine, a popular model known in every Polish household. The figure has been equipped with wheels, thanks to which the robot can move.

C3PO – consists entirely of one piece of sheet metal, painted in a characteristic

DROID – was created from used machine parts. A lot of bicycle chain was used to make the legs.

SPEEDER – the machine consists of metal sheet elements welded together. The core of the construction is the work of a welder who created an extremely durable structure.

Despite its small height the total weight of the figure is over 100 kg. The heaviest element is the engine of the biplane (aeroplane), from which the body of the robot was created. 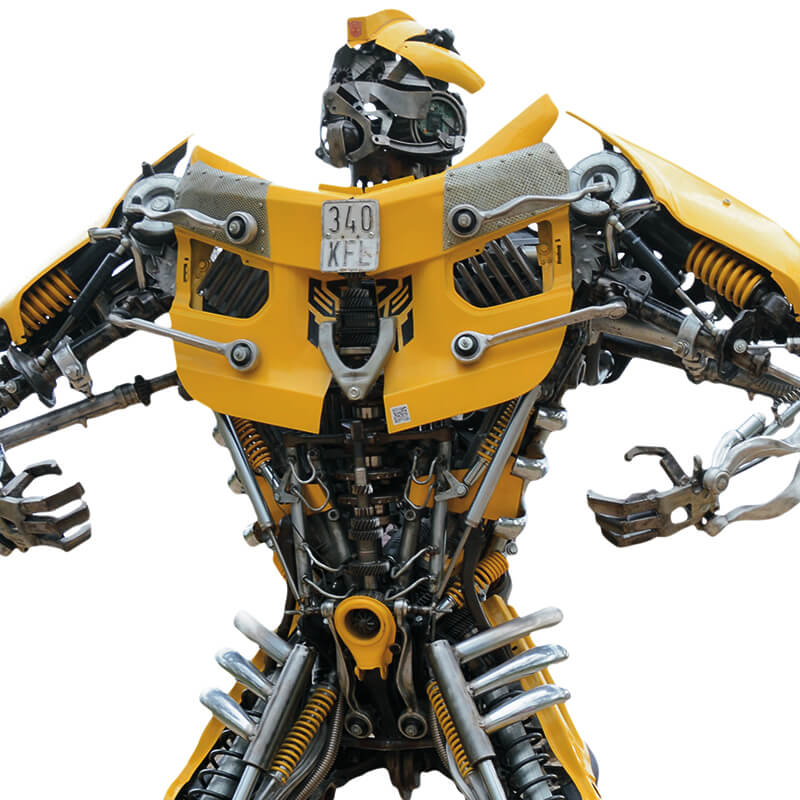